Stepping up in society

After a laughably low-class week harvesting citrus, it was time to blow some of our hard-earned cash in one of South Australia’s famed wine regions.

McLaren Vale lies just an hour south of Adelaide on the Fleurieu Peninsula. Row upon row of grapes stretch from rolling hillsides and across yellow-green plains until they meet the ocean. Narrow, tree-lined roads thread the countless tasting rooms together, and simply driving around town is a worthy afternoon activity in itself. It is just as pleasant as it sounds.

Dressed in our finest clothes (which for Nathan, meant the jeans he worked in all week), we headed for picturesque Coriole Vineyards. Despite our efforts, the employees seemed to realize we weren’t going to order a case of wine—probably from my lack of fancy handbag and leather boots— and didn’t spend much time on us. Oh, well.  The wine was very, very good.

We took a bottle of Sangiovese and headed to a table surrounded by blooming gardens, shaded by an old tree, and frequented by the resident cat— a green-eyed and extremely soft fellow who thankfully spent a fair amount of time hanging out with us. From there we sipped wine, nibbled on cheese and crackers, and laughed at the overly fancy crowd in cable-knit sweaters and designer sunglasses swirling their wine and commenting on the elegance of the vintage. It was pretty hilarious, and quite a contrast from the orange picking crowd.

Notice Steph's scarf... a bold attempt at fitting in. 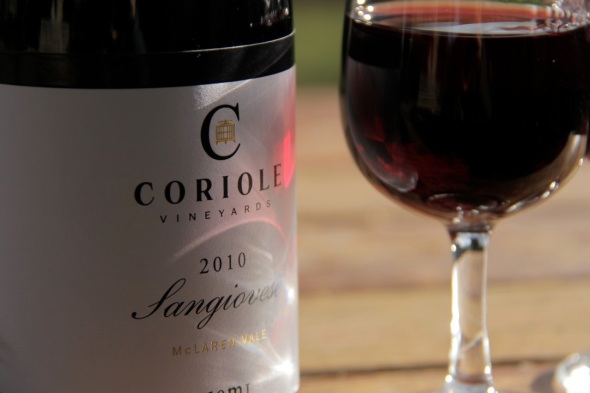 Sitting there soaking up the last of the winter sunshine, we realized we lacked only four things for a perfect stay in McLaren Vale: time, money, friends, and bicycles. It was easy to imagine an excellent long weekend of riding bike paths and back roads from vineyard to vineyard with some good company.

Early the next morning, we drove south to Victor Harbor in the hope of spotting some of the many southern right whales that swim into the bay in the winter. Sadly, we were apparently a week or two early, but a walk around the surprisingly lovely Granite Island more than made up for it. 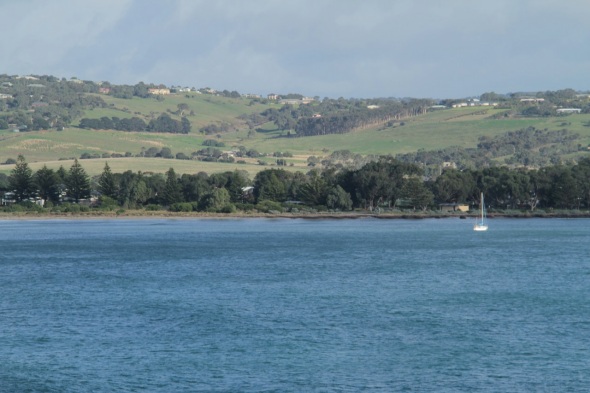 Not to mention some hot, fresh, very unhealthy cinnamon doughnuts.

It was a short but satisfying goodbye to the ocean. The next few days took us straight inland— towards the Outback, Uluru, and the dry, empty country that to many means Australia.

This entry was posted on June 12, 2011 by Five Eyes Films. It was filed under Uncategorized and was tagged with australia, food.