Thirsty travelers take note: New Zealand does brew excellent beer, and we now know where to find it!

Wellington is New Zealand’s capitol city, and has a reputation that precedes it. Everywhere we travel across this country, a mention of Wellington usually garners a comment on how great the city is or how crappy its weather can be. Unfortunately for us, it was the latter that came true, as wind-driven rain pounded down for all three days we spent in the city. This meant that most of our time was spent in free museums or looking forward to the next meal, snack, or drink, in a search that eventually led us to the mighty lineup of taps at The Malthouse.

Bare wood beams, a wall full of bottles from far and wide, and a beer list as thick as the Bible. Immediately, we felt at home.

After a few generous samples we secured respective pints of a Belgian white and an IPA from Blenhiem-based Moa, the Armageddon IPA from Epic, and a delightfully hoppy American IPA from Wellington’s own Tuatara. 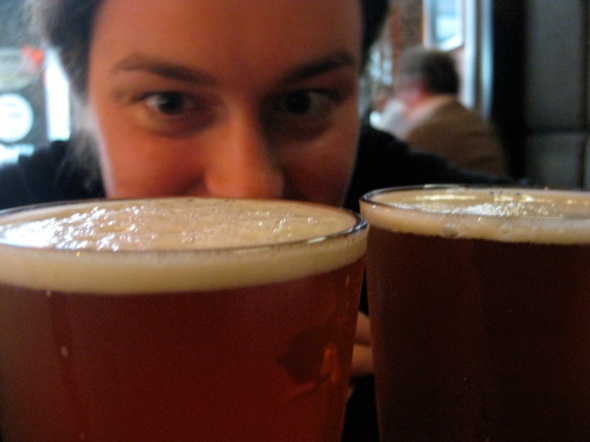 We could have spent the night here, devouring pint after pint and curling up under the bar for a sound slumber if not for one thing: $10 beers have a nasty habit of adding up quite quickly. Thus, the evening saw us torn between far off looks of contentment and bitter shakes of the head, muttering things like, “it’s a damn shame.” After two apiece we ripped ourselves off the stools and shuffled home through the drizzle.

But despite the weather, we’re left with fond memories of New Zealand’s favorite city. We’ll just have to imagine the views of glittering steel and glass against a bright blue bay and autumn sunshine… because the only photos we have are from inside the bar.

Last fall, the city of Christchurch made international headlines for a devastating earthquake, followed by another, more destructive one last February. Multitudes of tremors and aftershocks since then (over 7,000!) have earned Christchurch the nickname displayed in our title.

Though aware of the damage, none of us realized its full extent until we attempted to drive into town. A chain link fence peppered with ominous warning signs blocks off the entire city center, so that no one other than construction personnel can enter what was once the bustling downtown. Countless restaurants, hotels, bars, shops, and other businesses stand forlornly empty, their imminent demolition scrawled on the walls in spray paint and posted notices. 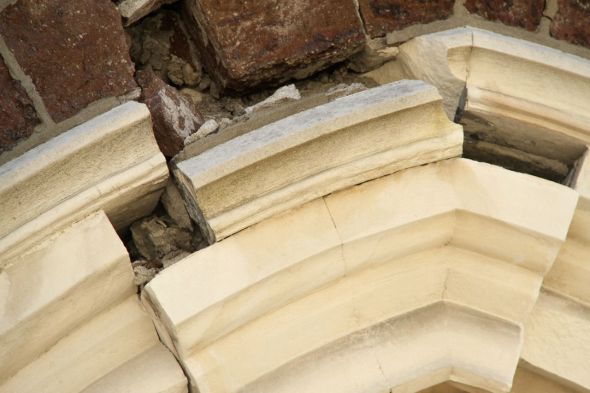 END_OF_DOCUMENT_TOKEN_TO_BE_REPLACED

Rewind: Back to the future in Singapore

Currently, we spend nine hours a day six days a week wrapping grape vines around wires— a six-week blast of intensive money-making so we can get back to days of carefree vacationing.

It’s not bad work, but it doesn’t exactly make for thrilling blog material. Therefore, we’re starting a new miniseries to keep your attention, drawing on past travel moments or reflections that never quite made it online.

This week: a brief sojourn into Singapore.

Long layovers are one of the dreaded necessities that come with air travel. They vary from several hours in grimy purgatory (New York’s LaGuardia) to pleasant free web surfing (Portland, Oregon). But generally, once the book stores are given a once over and a seven dollar beer is consumed, they are something to be forgotten. We heard Singapore’s airport was one of the nicest in the world, so we were actually looking forward to stopping there enroute from Manila to Melbourne last May.

Upon arriving, we rushed through terminals to a nondescript kiosk to take advantage of something that almost sounded too good to be true: Changi Airport offers a two-hour city tour for passengers on long layovers. For free. We barely made the last departure for the day, happily signed up, cleared customs, and piled on a bus with a dozen others. As we drove past brand new high rises, the largest Ferris wheel in the world, and state of the art stadiums and botanical gardens, it was clear that this tiny urban nation was a complete turnaround from the Asia we just left. And really, a complete turnaround from much of the world.

The city was spotlessly clean, orderly, wealthy, and quiet— to the point that it kind of reminded us of the Epcot center at Disneyworld. The government also has a hand in nearly everything here: even chewing gum is outlawed to preserve the purity of the streets. As the bus wove through the gleaming streets, our cheery and funny guide tossed out tidbits of Singaporean life. Our personal favorite: “What kind of wildlife do we have here? We have no wildlife. Only cats and dogs.”

Once downtown, everyone was allowed a half hour to explore, and then it was back on the bus and back to the airport, all with brilliant efficiency.

As nice as the city was, we were frankly more amazed by the airport, which surpassed our lofty expectations. Here few of the most outrageous complimentary features:

A gigantic TV comprised of 12 mounted flatscreens along with plush chairs, complete with built-in speakers. 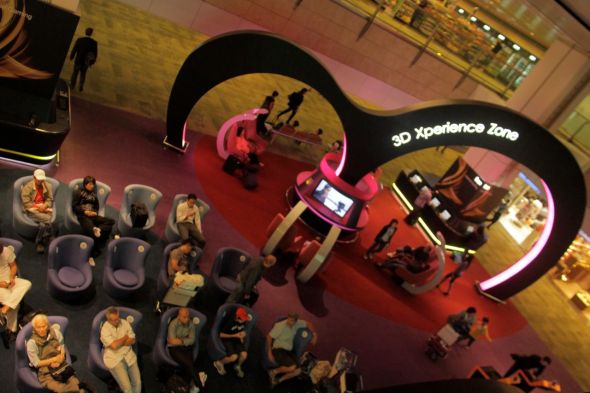 We did not partake in the 3D Xperience Zone, but it seemed to involve video games.

Countless gardens and orchids on every mundane surface.

A man playing soothing music on a grand piano.

And our personal favorite, a movie theater, where we watched Russell Crowe slay Frenchmen in the latest version of Robin Hood.

When the time came,  we didn’t want to leave.  It was like spending seven hours in the future.

Pies in the park: a visit to Sydney

Warm, sunny days, waterfront eateries, good beer, and beautiful parks are the recipe for a perfect city experience. And that’s exactly what we got during our two days in Sydney.

After an unappealing drive in through the suburbs, we checked into a hostel in Glebe, a lovely residential neighborhood lined with cafes and large trees. Leaves fluttered down and collected on the shaded sidewalks in crisp, cool autumn perfection.

Sydney’s harbor is as beautiful as we’ve always heard. We wandered along the docks in Darling Harbor in the morning—taking note of upcoming happy hour specials—and made our way out onto the Harbor Bridge.

Our first glimpse of the water at Darling Harbor.

Midway across, the sun cast the bridge’s shadow onto the sparkling blue harbor, and illuminated boats of all sizes that ply its waters. Scalloped dark green shores extended into the distance and the city’s iconic Opera House lured wandering eyes directly below.

We expected the Opera House to disappoint. Synonymous with Australia, slapped on a million postcards, and featured in many a token travel photo, the Opera House is victim to the kind of overexposure that often ends in letdown upon seeing the real thing. But it’s awesome. As we walked further across the bridge, the differing angles changed the shape of the sails entirely, giving it a totally new look. Up close, it’s even better. The tiled roof— actually, those of three separate buildings— soars into the sky, sloping gracefully away from your eyes, with the harbor and bridge as an unbeatable backdrop. 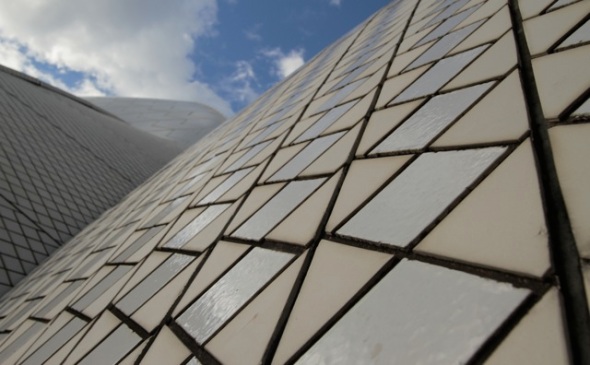 Landmarks aside, Sydney’s incredible Royal Botanic Gardens were by far the highlight.  The 75-acre gardens hold countless plants from all over the world, arranged aesthetically for maximum pastoral enjoyment. Enormous fig trees spread shade over swaths of grass, their thick branches almost skimming the ground. Vegetation of all shades and shaped is scattered around, while birds and flying foxes twitter from the treetops. At a turn of the trail, you can find yourself in a different environment— from the Oriental Gardens to the Rainforest Walk to the Fernery and the succulents. It’s just incredible. And it’s free.

One of the garden's many sprawling fig trees.

A perfect mix of garden and open space— this is how to design a city park.

END_OF_DOCUMENT_TOKEN_TO_BE_REPLACED

What we’ll miss and what we won’t

After three hot, wonderful months in Southeast Asia, we’ve landed on Australia’s southern coast, where winter is just beginning to set in.

Before we begin exploring this vast country, we wanted to share a few things we are thrilled to be leaving behind, and some things we will desperately miss.

Things we will not miss:

1. Riding in any variety of public vehicle.
2. Prevalence of hard-boiled eggs on said vehicles.
3. Being treated like an ATM.
4. Watching people throw garbage on the ground.
5. Toilet paper being replaced with a butt washing spray hose.
6. The beer selection.
7. The lack of cheese.

1. Fresh fruit on every street corner. Especially mangos!
2. Paying $3 for dinner and $10 for a hotel.
3. Wearing flip-flops all day.
4. A spring roll appetizer at every meal.
5. The feeling of being very far away from home.
6. A change of scenery every few days.
7. Thai curries and Lao sticky rice.
8. El Nido’s tropical beaches.
9. Rice paddies.
10. Excited children yelling “hello.”

First and foremost, our thoughts are with everyone in Japan right now affected by the earthquake. Having grown to love the place in our five weeks there, it is especially heartbreaking to see the devastation. It is an amazing country that you should definitely visit if you ever get the chance.

This is the first video in a series highlighting our fifteen-months across the Pacific. It’s 14 minutes long so get comfortable, grab a beer and watch it fullscreen if your bandwidth allows! Turning off HD will make for a faster load. Enjoy!

The speed of air travel can lead to some intense contrasts. Midway through February, orderly, wintry Kyoto was replaced with the chaos, noise and oppressive heat of Bangkok. The waves of taxi drivers and touts pressing their services were a bit bewildering after a month with the reserved, unfailingly polite Japanese. From the perfection of thousand year old gardens to soot-stained streets lined with garbage and stray dogs, this was a textbook case of culture shock.

END_OF_DOCUMENT_TOKEN_TO_BE_REPLACED

35 million people and lots of fish

It isn’t until you look at it from above that you get a feel for just how big Tokyo is.

Wandering the streets, the buildings don’t seem excessively huge, the views aren’t especially impressive—in fact, the only remarkable thing seems to be how many people are riding the subways. But from the 45th floor of the Tokyo Metropolitan Government Building, it’s a different story. Buildings, large and small, stretch off in every direction, disappearing into the horizon. Literally. You can’t see the end of them. We could go on and on trying to describe it, but…it’s big. Very big.