As a way to say goodbye to the South Island that we’ve called home for over 7 months, we recently made the full day’s drive down to Wanaka for one more mountain adventure. The beautiful West Matukituki Valley lies in the heart of Mount Aspiring National Park, which has captivated us time and time again with beech forest, tumbling glaciers, and mountain meadows. The chance to spend two days high above and encircled by the Southern Alps proved the perfect farewell. 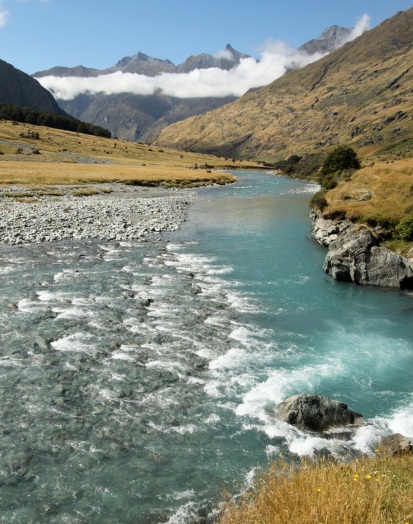 Ascending 4,000 feet in just 2 miles, the route from Aspiring Hut to the north ridge of Mount Tyndall is a punishing ascent through snow grass and precipitous crags.

But the view helps take the mind off burning legs and lungs.

A small hollow at the top of the ridge makes for a perfect campsite: just enough protection from a stiff east wind, and incredible views across the valley to Mount Aspiring. END_OF_DOCUMENT_TOKEN_TO_BE_REPLACED

The second to last day of 2011 found us, once again, climbing high into the Southern Alps in search of a view.

A late start, a steep climb, a long rest, and some blind route-finding (lesson: always bring a map) meant we were behind schedule… and not even standing on the true summit of the peak we came to climb. No matter. The sun lingers on late into the evening at this time of year, leaving us plenty of time to savor the glow from the slopes of Mount Armstrong. 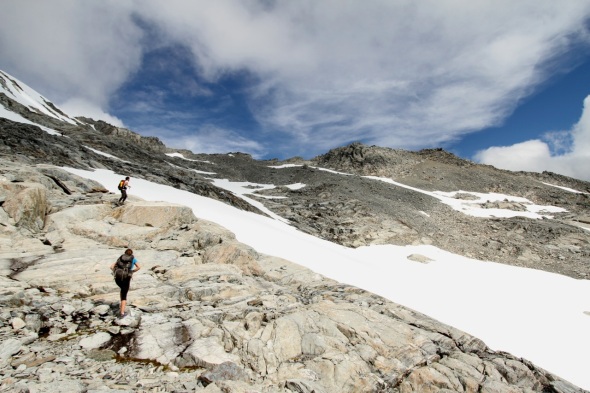 Our false summit was a crumbling, rocky pinnacle along the ridgeline, barely wide enough to fit our party of six. 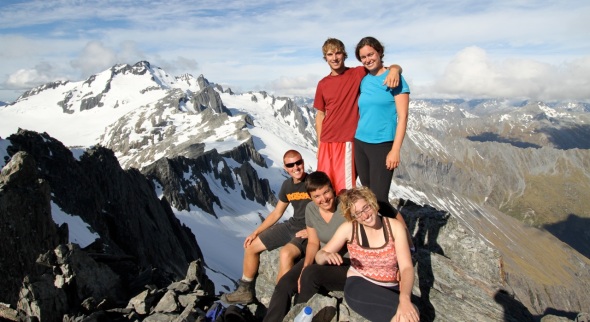 Nate, Steph, Alex, Aeryca and Deborah (pleased to find themselves 3,000 miles away from the Portland rain), and a friendly Spaniard to take the shot. END_OF_DOCUMENT_TOKEN_TO_BE_REPLACED

A Tramping Trilogy: Above the Clouds

It only took a few days of slothing around Wanaka’s cafes and public library to fully recover from our 64-kilometer Gillespie Pass adventure. Though we were due in Christchurch in just three days, the weather forecast for the weekend was promising and we had our sights set higher.

The two-day climb up Mount Adams, a prominent peak halfway up the island’s west coast, had caught our eye months ago. Deemed in a tramping book as “one of the finest viewpoints on the coast that can be reached without the need for serious mountaineering,” the upper reaches of the climb are on snow and still require crampons and an ice axe. After stocking up on snack mix, we rented some gear out on a Friday afternoon and rallied for the five-hour drive over Haast Pass and up the coast.

Loaded down with mountaineering gear and the typical array of camping supplies, we started out on the banks of Dry Creek on a sunny and promising morning. It’s actually a rather misleading moniker, and the route upriver requires lots of boulder-hopping and countless river fords. Looking back over our shoulder after an hour of progress, we noticed we were starting out disturbingly close to sea level for a climb up a 7,286-foot mountain.

Looking back down Dry Creek with the Tasman Sea beyond.

At last, a cairn marked the start of the proper trail, and after a snack break we started up. And by up, we mean straight up— 4,000 feet up in 2 miles. 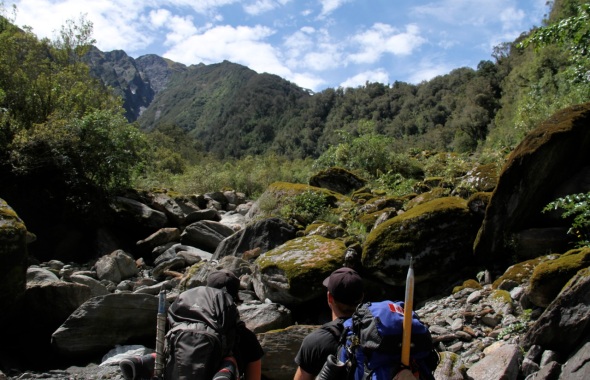 Adams is not a popular climb, and the route is accordingly rough. In fact, we’d been told that Department of Conservation officials hadn’t been up here for maintenance in two years, which explained the downed trees. We climbed—literally grappling tree roots and branches—along the narrow, gnarled, and often faint footpath. It was clear from quantity of spider webs that we’d have the mountain to ourselves.

Mount Adams falls in a slender section of the west coast known as the “beech gap,” and the lovely beech forests we’ve grown to love were replaced by dense, tangled woods. We did not love it, and after three hours we were pleased to break out into open slopes covered in snow grass. The marked trail ended here, allowing us to find our own way up along the ridgeline, which was now engulfed in afternoon clouds. Mercifully, they obscured how much further we had to go.

By now, our heavily laden packs were wearing us down, and I could have fallen asleep with my backpack on. Actually, I tried this on one short break, worrying Nate enough that he kindly took some of the gear off my pack. This was by far the hardest hike we’d ever undertaken, and it was taking a serious toll. Alex relieved me of my crampons, and I slowly made my way up, up, up.

Just as fatigue seemed to be settling in for good, the sun started to poke through, and a few minutes later we had the first of many rewards. Bright, silvery clouds parted to reveal windows of snowy mountains and rugged alpine country. We continued up a series of several humps in awe of our surroundings.