A Tramping Trilogy: Above the Clouds

It only took a few days of slothing around Wanaka’s cafes and public library to fully recover from our 64-kilometer Gillespie Pass adventure. Though we were due in Christchurch in just three days, the weather forecast for the weekend was promising and we had our sights set higher.

The two-day climb up Mount Adams, a prominent peak halfway up the island’s west coast, had caught our eye months ago. Deemed in a tramping book as “one of the finest viewpoints on the coast that can be reached without the need for serious mountaineering,” the upper reaches of the climb are on snow and still require crampons and an ice axe. After stocking up on snack mix, we rented some gear out on a Friday afternoon and rallied for the five-hour drive over Haast Pass and up the coast.

Loaded down with mountaineering gear and the typical array of camping supplies, we started out on the banks of Dry Creek on a sunny and promising morning. It’s actually a rather misleading moniker, and the route upriver requires lots of boulder-hopping and countless river fords. Looking back over our shoulder after an hour of progress, we noticed we were starting out disturbingly close to sea level for a climb up a 7,286-foot mountain. 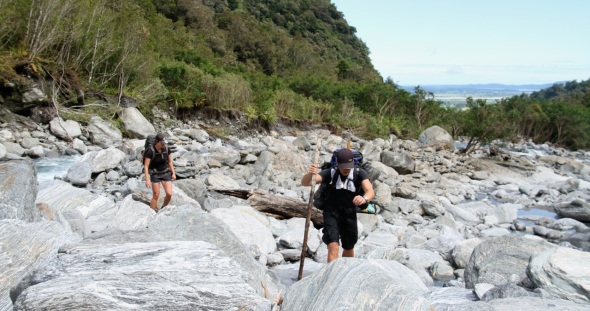 Looking back down Dry Creek with the Tasman Sea beyond. 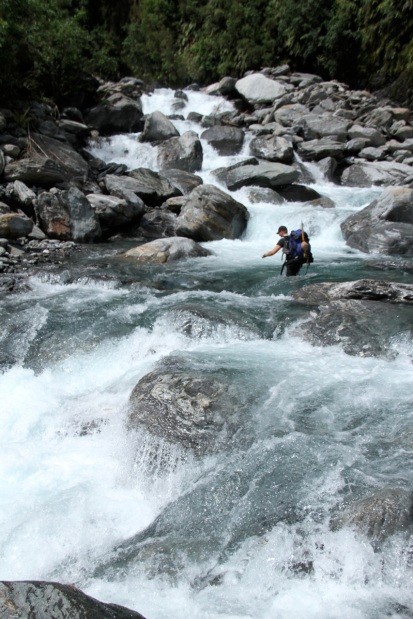 At last, a cairn marked the start of the proper trail, and after a snack break we started up. And by up, we mean straight up— 4,000 feet up in 2 miles.

Adams is not a popular climb, and the route is accordingly rough. In fact, we’d been told that Department of Conservation officials hadn’t been up here for maintenance in two years, which explained the downed trees. We climbed—literally grappling tree roots and branches—along the narrow, gnarled, and often faint footpath. It was clear from quantity of spider webs that we’d have the mountain to ourselves.

Mount Adams falls in a slender section of the west coast known as the “beech gap,” and the lovely beech forests we’ve grown to love were replaced by dense, tangled woods. We did not love it, and after three hours we were pleased to break out into open slopes covered in snow grass. The marked trail ended here, allowing us to find our own way up along the ridgeline, which was now engulfed in afternoon clouds. Mercifully, they obscured how much further we had to go.

By now, our heavily laden packs were wearing us down, and I could have fallen asleep with my backpack on. Actually, I tried this on one short break, worrying Nate enough that he kindly took some of the gear off my pack. This was by far the hardest hike we’d ever undertaken, and it was taking a serious toll. Alex relieved me of my crampons, and I slowly made my way up, up, up.

Just as fatigue seemed to be settling in for good, the sun started to poke through, and a few minutes later we had the first of many rewards. Bright, silvery clouds parted to reveal windows of snowy mountains and rugged alpine country. We continued up a series of several humps in awe of our surroundings. 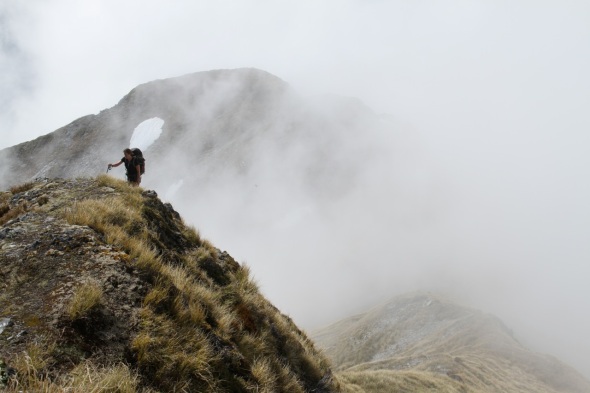 At 5,800 feet and about the end of our endurance, we finally stopped for the day, dropping heavy packs and resting weary legs. A dried tarn provided a perfect flat site amongst the rocks, and one of the most spectacular spots we have ever pitched a tent. Tomorrow’s climb loomed ahead, today’s ridgeline fell away below, and a few yards to the right cliffs dropped off into steep snowy ravines.

Up on the cliffside, a vein of white quartz had burst through the surrounding rock, and we perched there to watch the evening light show. As the sun sank lower over the ocean, the clouds mostly evaporated, leaving the distant ridgelines and farmland below tinged with pink.

Up before six the next morning to a cloudless sky, it was clear we had struck a perfect day to climb the summit. We left our tents pitched and anything unnecessary behind for the four-hour trip to the top and back, and set out with Mount Cook for company. 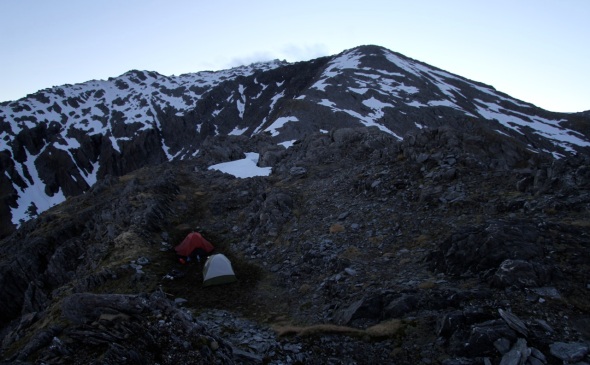 Our campsite, with our route up the western shoulder of Mt. Adams visible beyond.

The broad side of Mount Cook, just right of center.

Patchy snowfields began just above our campsite, and the ice axes and crampons we’d lugged all that way proved invaluable. We switchbacked up a ribbon of rock-hard snow until reaching a shoulder, which gave us our first view of the true summit and the eastern side of the mountain. The rest of the route lay before us, and from there the walk was bliss. Early morning light sparkled off the snow with endless views of high peaks and green valleys beyond.

From the shoulder looking northeast. The summit is off to the right just under the sun.

We skirted along the top of the Escape Glacier, giving several crevasses a wide berth enroute. Though the climb wasn’t treacherous, slick snow sloped a long way down to rocky drop offs, making us choose our steps carefully. Alex slipped once, sliding ten feet and picking up speed fast before he arrested himself, not fazing him too much (or so he says) but nearly giving me a heart attack. Finally, we ditched the crampons for a final short scramble up the rocky summit cone. 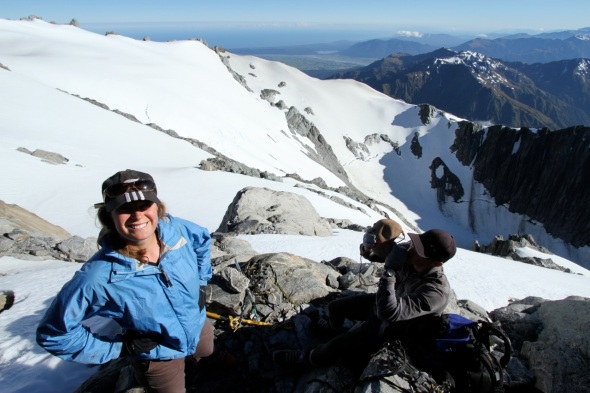 A quick break before the top.

Mount Adams is set back from the other larger peaks of the Southern Alps, and the compact, rocky summit gave us an unimpeded view in every direction. The ocean swept out to the horizon to the east, and Mount Cook stood proudly off in the distance. A sharp ridge curled around us like the spine of a slumbering dragon, and clouds wafted through the contours of the mountains. Standing on the narrow summit and taking in this incredible part of the world is surely one of the highlights of our entire trip.

Looking west, at our route up and the Tasman Sea below. 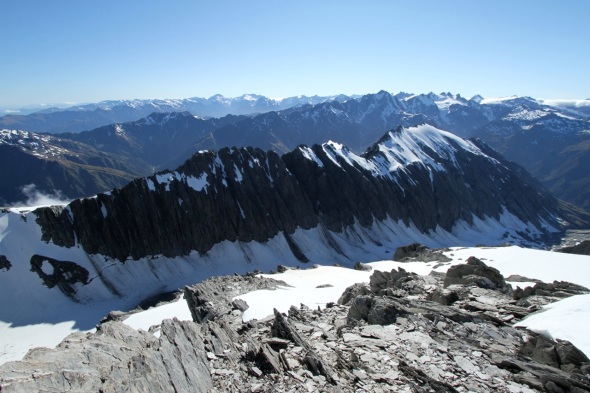 After half an hour on top we reluctantly clambered down, strapped our crampons back on, and retraced our steps down to camp. The view back down the ridgeline at our tents and Dry Creek confirmed how far we had climbed in the past two days, and how far we had yet to descend. 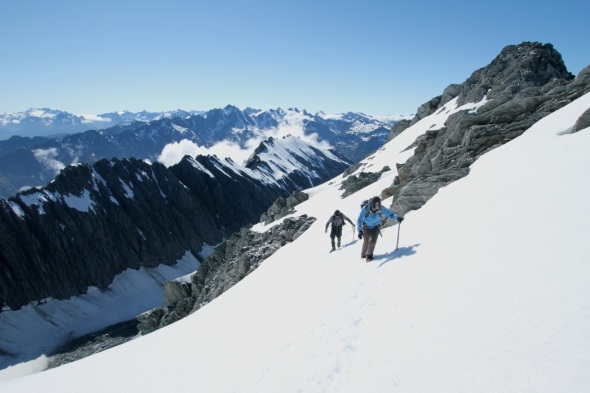 A rest back at camp before the descent.

Back into the clouds.

We were dreading the rest of walk for good reason. With tired legs and sore knees, every rock, root, and fallen tree we had worked so hard to surmount yesterday had to be revisited. Much of it was a blur, and our minds have since disconnected the whole miserable, exhausting five hours from the rest of the trip. At last, we stumbled up to the car and fell inside.

From there it was a five-hour drive back to Wanaka (with a brief stop for cheeseburgers and beer) before another six to Christchurch (with a brief stop for cheeseburgers) the following day to pick up some more welcome visitors. All the while, our thoughts recalled visions of idyllic mountain scenery and the “crunch…crunch” of crampons on hard snow.

This entry was posted on January 14, 2012 by Five Eyes Films. It was filed under Uncategorized and was tagged with hiking, mountaineering, mountains, new zealand, southern alps, tramping.